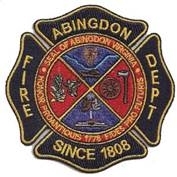 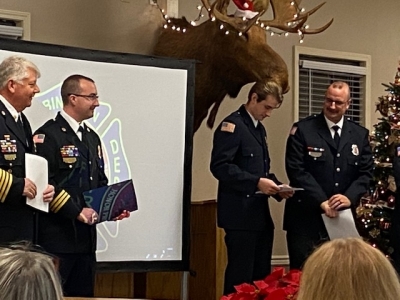 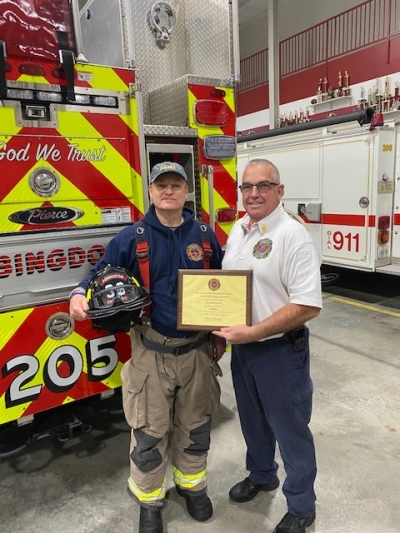 Gary Bailey received a plaque and a black helmet for passing his Firefighter 1 Certification. Receiving the black helmet signifies his completion of this class by our department, Congratulations Gary!
New Spill Trailer

A project by the membership of the Abingdon Fire Department continues. A cargo trailer; donated by First Community Bank, is being equipped to respond to hazardous spills as time and funding permits. A...
➜
About us

Abingdon Fire Department is located in the Historic Town of Abingdon, the County seat of Southwest Virginia’s Washington County, part of the Appalachian Region. The Department was formed in 1808 and chartered in 1949. On March 1, 2016 the Town of Abingdon hired its first full time Fire Chief.  The 49 Member Fire Department is one of nine departments within Washington County covering 60 square miles of forested rolling steep rural countryside providing fire service operations for 16,000 people in our district.  The Department faces the challenges of structure fire control in a small commercial district, several assisted living facilities, school buildings, small apartment complexes, several small manufacturing facilities, along with several hundred rural residences and wildland interfaces.

Past and Present Fire Chiefs of the Abingdon Fire Department

Building entrance keys, access cards and floor plans can be stored in the high-security KNOX-BOX mounted near the building entrance.  The KNOX-BOX is purchased by the property owner and is keyed to a single master key controlled by the Town of Abingdon Fire Department.

If you are interested in purchasing a KNOX-BOX you can visit https://knoxbox.com/store/registerDept.cfm  Enter the City and State, press Search and Abingdon Fire Department eApprove will appear.  Select the product you would like to purchase, press Proceed with Pre-Authorization Order.  If you have any additional questions about the KNOX-BOX Program you can call (276) 628-5563 of e-mail jmccormick@abingdon-va.gov

This site has been viewed 625,481 times.
Calls
News
Events
Pictures
Apparatus
Maintained by the members and staff of Abingdon Fire Department. Designated trademarks and brands are the property of their respective owners. Copyright © 2006-2022. YourFirstDue Inc. All Rights Reserved. Content on this web site is supplied by Abingdon Fire Department. YourFirstDue Inc. cannot be held responsible or liable for any content, text, pictures, or any other media found on this web site.
Management login
Powered by